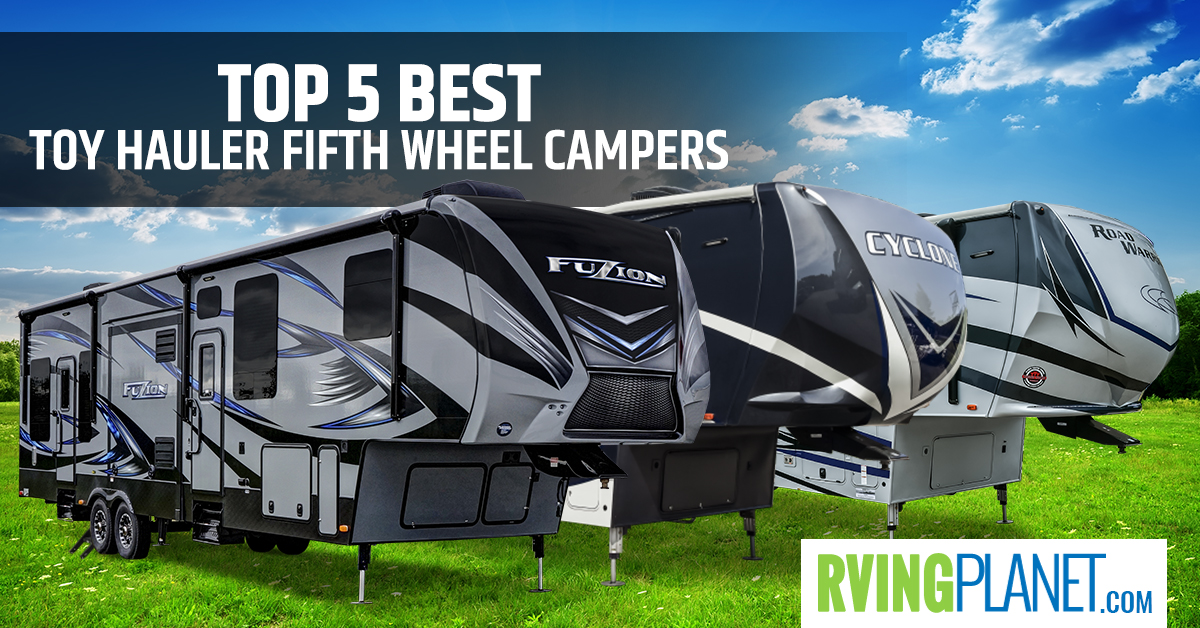 As you’re looking for a travel trailer, a fifth wheel or any RV for your next camping trip, a factor you must keep in mind is if you’re bringing any vehicles or bikes along. If there aren’t a lot of people or you’re only bringing one bike along, a simple fifth wheel with a bike rack on the back will do you just fine. But for some serious storage for those bad boys, a dedicated toy hauler is called for, which is what we’ll be discussing here. So, without any further ado, here are the top 5 best toy hauler fifth wheels:

What puts an RV on the list: The number of toy hauler fifth wheels out there might not be staggering one, but there are enough to get one quite busy for a while if they’re planning to research. We have selected the toy hauler fifth wheels which are quite spacious since the space for your vehicle will be taking quite a bit of space. We’ve also followed our standard research material and went with the ones that have the best user and critic ratings. 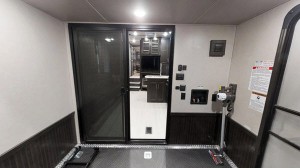 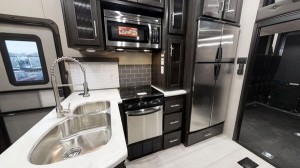 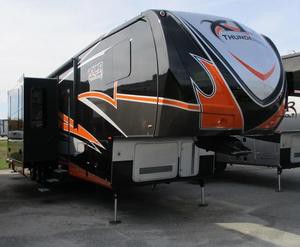 Let’s dive into the features, then. Being a fifth wheel, you can expect all the doodads and features from its regular variants such as full sized refrigerators and high BTU furnaces. But it sets itself apart with beautiful tile flooring, crown molding in all the rooms, hid-n-screen and many other features similar to these. Of course, upgrading it is also a breeze since there are options available such as a second TV in the bedroom, myRV multiplex system, second electric awning, three 13,500 BTU air conditioners with energy management system, and this list goes on for quite a while, which is why we recommend checking out the RV page above! 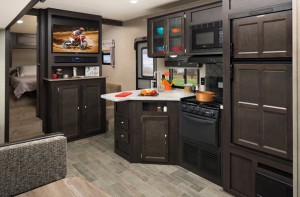 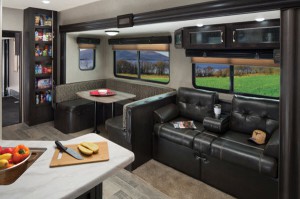 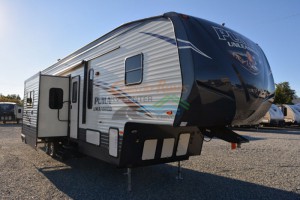 Why we recommend Palomino Puma Toy Hauler fifth wheel: You might be familiar with the Puma Lineup which is not only a series of travel trailers and fifth wheels but also has a few floorplans to speak of in the toy hauler fifth wheels department. It’s lighter than our previous choice (Puma Unleashed 359THKS) and is shorter too, which can be perfect if you’re there aren’t a lot of people coming with. It’s sleeping capacity reflects that too, having a maximum capacity of 6 on the Puma Unleashed 351THSS.

On the outside, the Puma Unleashed features pass-thru storage, power awning, fiberglass construction and powder coated frames. Head on inside and you’ll be greeted with its gigantic ~7 feet ceiling that makes use of this height by incorporating storage on it (14-inch overhead cabinets). You can change both the look and the features to your liking with its extensive range of options and 4 different interior decor options. Bottom line: we have no reason to not recommend the Puma Unleashed as a solid choice if you’re looking for the best toy hauler fifth wheels!

For Those Wanting The Toy Hauler Version of The Cougar! 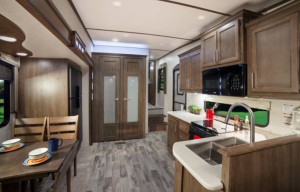 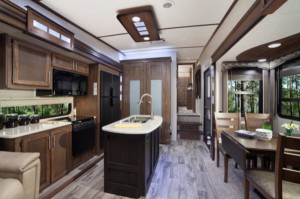 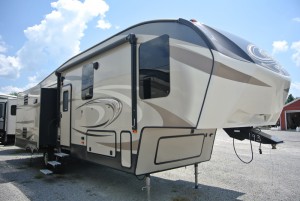 Why we recommend the Keystone Cougar Toy Hauler fifth wheel: Akin to the Puma, the Keystone Cougar has is own variant of toy hauler fifth wheel, even if the brand only really has two floorplans in its name: The Cougar 326SRX and the Cougar 326SRXWE, which are almost identical to each other. But don’t let a single floorplan lead you thinking that it’s no good. Quality over quantity is the name of the game here, one which the Cougar seems to be playing really well.

Keystone certainly took their time with the interior here as it has everything you’ll ever expect from a fifth wheel. However, what makes this toy hauler fifth wheel so special is the fact that it has so many options to expand its capabilities and also a lot of packages which add a slew of different features ranging from a 12 cubic feet refrigerator to a second television in the bedroom. They are all focused towards a specific category (entertainment, comfort, etc) which makes them even more appealing and versatile, which alone is reason enough to recommend the Cougar as one of the best toy hauler fifth wheels out there! 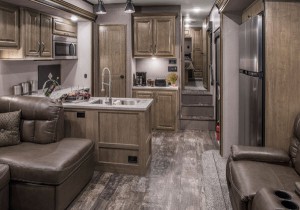 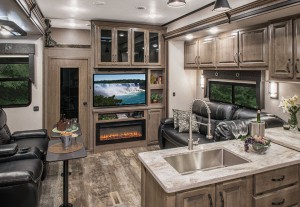 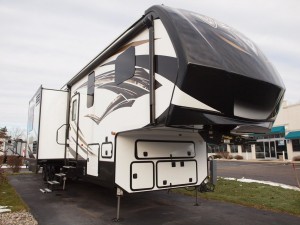 Why we recommend the KZ Venom Toy Hauler fifth wheel: If you’re looking for a slightly smaller but still sturdy variant of the XLR Thunderbolt then the KZ Venom is a toy hauler you should be looking at. Of course, that doesn’t mean it’s just good as an alternative as it has some pretty good floorplans of its own such as the Venom V3411TK and the Venom V4114TK. They have a sleeping capacity of 7 to 10 people so if you’re planning to bring a lot of people along, you’re all set with the Venom.

KZ isn’t a lot different from any of our other choices here in terms of features, which isn’t a bad thing, since we’re discussing the best of the best here. That means all the bells and whistles ranging from a huge 48-inch TV with an entertainment system to a deep storage space and a second TV in the bedroom. It also has a lot of options, and we mean a lot so we would suggest a gander at the RV page using the link above if you’re interesting in knowing all that the Venom has to offer! 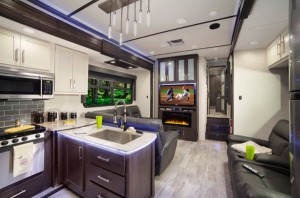 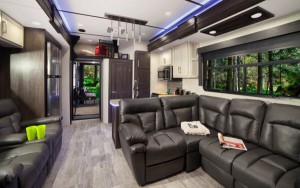 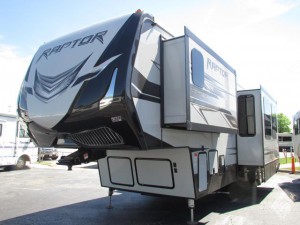 Why we recommend Keystone Raptor Toy Hauler Point fifth wheel: Another toy hauler from the stables of Keystone is the raptor that sports 11 floorplans ranging from roughly 13,000 to 16,000 lbs. Once again, there isn’t a lot of flexibility on the sleeping capacity since it starts with 7 on the Raptor and ends at 9 on the Raptor, making this only useful if you have lots of people tagging along. If you do, you’ll also be happy to know that they are quite spacious, ranging between 38 and 43 feet.

Listing every single feature about the Raptor could take quite a while, but in essence the selling points are the huge storage, dual air conditioners, hardwood ceiling with LED lighting, backup camera, and solar prep. Of course, it also goes without saying that you can upgrade a lot of these features or add new ones with its list of upgrades available, making the Raptor another good choice for those in the market for some toy hauler fifth wheels!

Whether it’s bringing bikes or a vehicle to your next camping trip, your venturesome soul will find these toy haulers to your satisfaction. Let the adventurous begin!

Share with us your favorite toy hauler fifth wheel in the comments below!