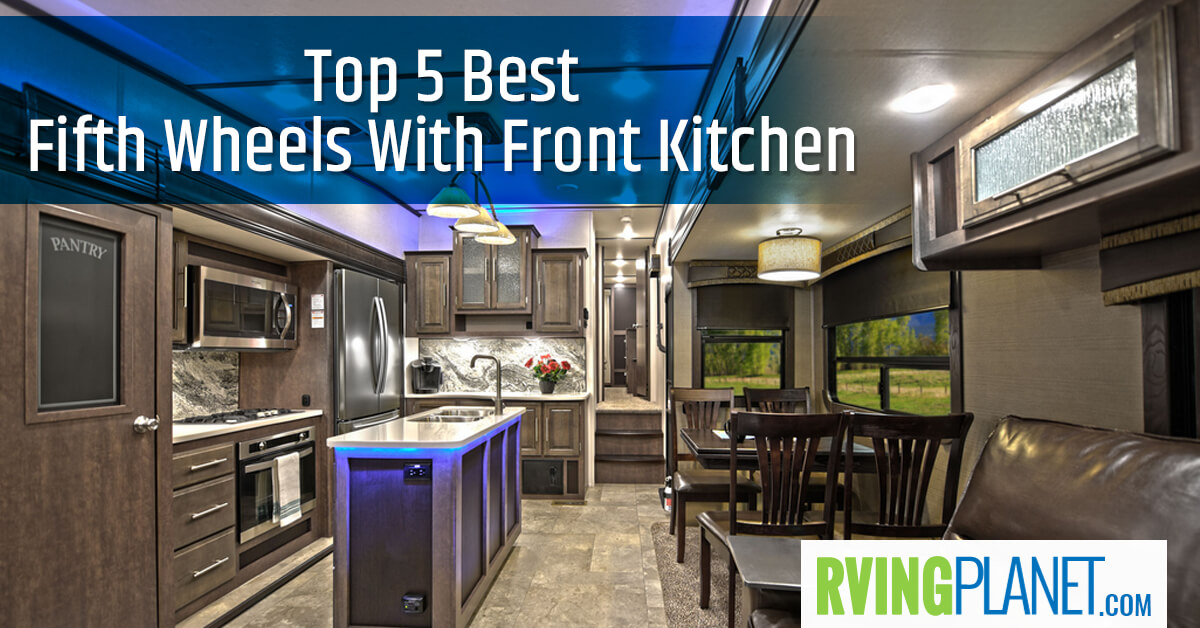 You’ll notice the plethora of choices in floorplan styles when exploring fifth wheels. One such choice will be front kitchen floorplans, which unmistakably features beautifully designed front kitchens. There are 2 popular advantages to this. First, it places the bedroom at the back, providing more privacy for couples who are traveling with the kids. Secondly, it will also provide lots of kitchen space and storage, and you can never have enough of that in an RV. If that has piqued your interest, read on to discover the top 5 best fifth wheels with front kitchen.

What puts an RV on the list: Truth be told, there aren’t a lot of fifth wheels that feature front kitchen floorplans, but we’ve still taken a look at all of them, and have featured the ones with the best ratings, reviews and features! 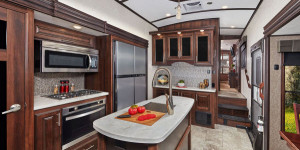 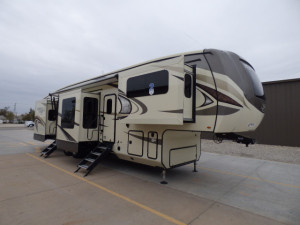 In relation to features, the North Point is filled with great amenities you’ll love. From the little things–such as USB chargers at dedicated points to the important stuff such as a thermostat controlled fireplace–this fifth wheel has a long list of features and an equally long list of options. Some of those include an 18 cubic foot refrigerator, exterior grill, dual pane windows, and so on. All in all, those looking for fifth wheels with front kitchen should definitely give the North Point a shot! 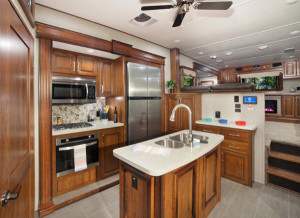 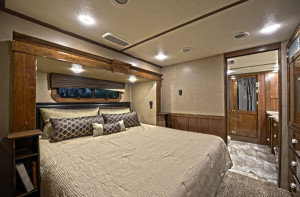 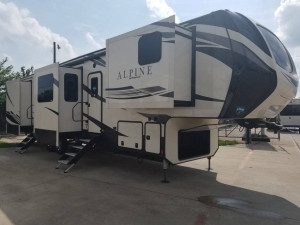 The Apline features 80% tinted windows, ducted heat, tri-fold sleeper sofa and master bedroom suite, and that’s just to name a few! In addition to those, there are many options and packages available such as the North Face Insulation Package. It adds a heated water works area, heated basement, and high gloss sidewalls among other additions which will make it ready for use in this chilly month and the ones to come.

Explore Your Heart Out! 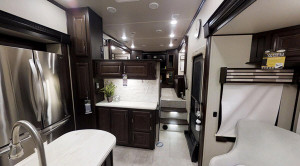 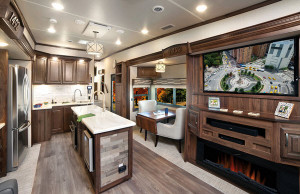 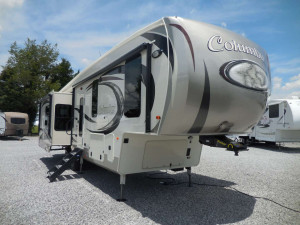 Why we recommend the Palomino Columbus fifth wheel: While our previous 2 choices of fifth wheels with front kitchen could sleep up to 8 people, you could also benefit a lot from the extra real estate by having a lesser sleeping capacity if you won’t be RVing with a lot of people. For that, we recommend the Palomino Columbus, and its Columbus F386FK floorplan in particular because it is 42 feet long and can hold up to 6 people, which really adds a lot of extra space.

While the Columbus isn’t advertised as one, the amount of insulation and construction features on this rig has convinced us that it’s a great 4 seasons fifth wheel camper. They’ve also paid equal attention to the look and luxury by including features such as cherry hardwood steps, central vacuum system, frameless tinted windows among others. There are tons of expansions available too, so be sure to check them out!

The Cozier ‘Family of 4’ Fifth Wheel! 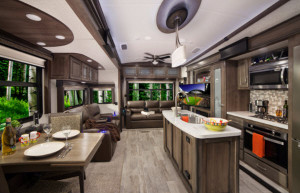 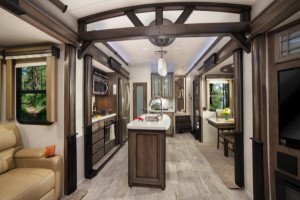 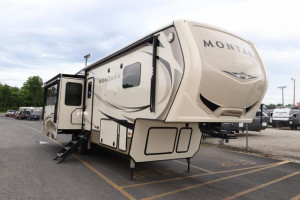 Why we recommend the Keystone Montana fifth wheel: Front kitchen floorplans on fifth wheels are usually well over 40 feet long. However, if you want something a bit smaller, Keystone’s Montana will be right up your alley as its Montana 3741FK floorplan features a front kitchen and is just shy of 40 feet. If you’re comfortable looking into other floorplan styles, there are shorter and lighter ones available as well!

The feature set varies from its regular variant to a 20th anniversary model but the standard amenities include solid surface countertops, aluminum framing on walls, Roadarmor™ suspension, among others. It also has quite a variety of expansion packs, the most popular in our opinion is the Four Seasons Package. This package is great for this winter season with all the insulation features that it boasts. 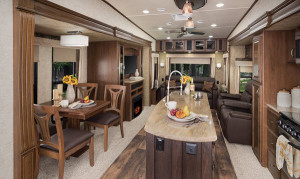 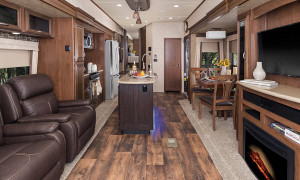 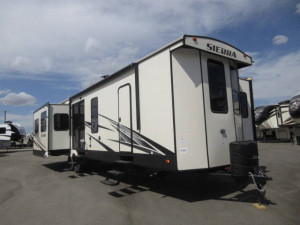 Why we recommend Forest River Sierra fifth wheel: We can rarely write a top 5 list post without a Forest River model! Among a plethora of its RVs, the Sierra, particularly the Sierra 38FKOK, features a front kitchen. This specific model provides a spacious 41 footprint and has 6 slideouts! It sleeps 6 but has other floorplans that hold up to 9 people.

As far as features go, the Sierra doesn’t disappoint, much like any other RV from the manufacturer. Everything from a central vacuum to a 40-inch TV is there, providing utmost luxury and keeping you warm when you opt for the package that adds better insulation, upgraded construction and many other cool amenities. In a nutshell, we have no qualms on tagging the Sierra as a top-notch fifth wheel with a front kitchen.

With these fifth wheels, you’ll have a sweet setup to invite all of your friends in the living room and make great use of the kitchen to cook and carry a conversation with ease!

Share with us your favorite front kitchen fifth wheels for winter in the comments below!