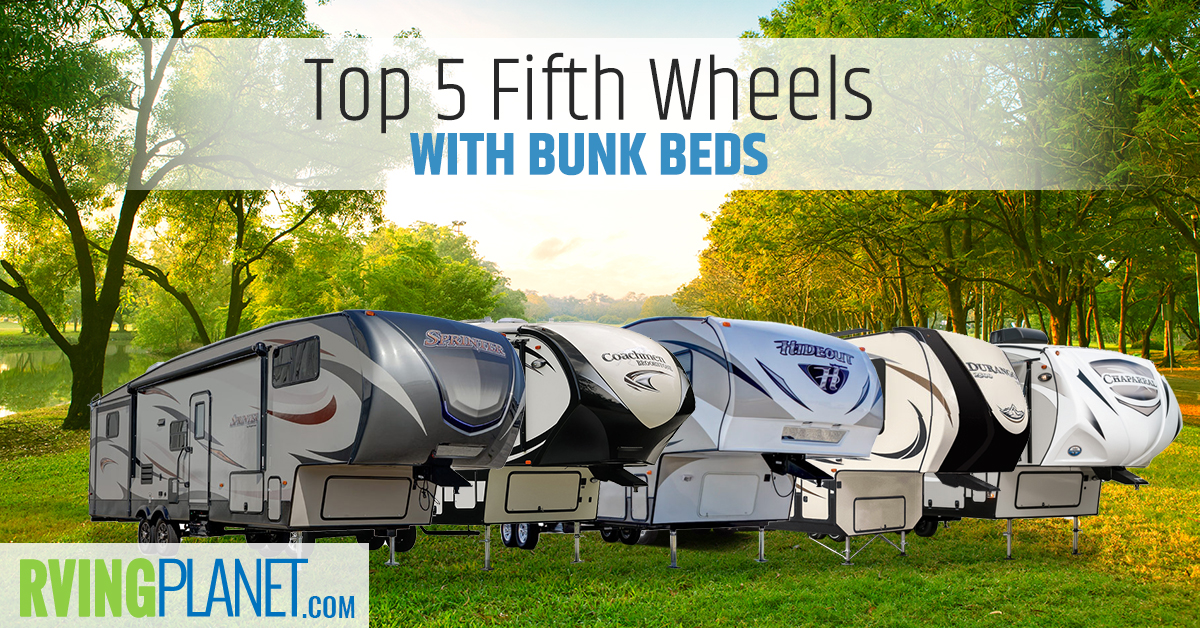 So, you’re bringing along the entire party for your next camping trip? Good! After all, the more, the merrier, right? Well, all of those people will need a place to kip and spend their time, which is why its important to choose a good fifth wheel with a sleeping capacity of more than 6 people. With that in mind, we’ve put together a list of the top 5 best fifth wheel RVs with bunk beds. Read on to find out!

What puts an RV on the list: Fifth wheels with bunk beds are dime a dozen. However, the ones that made our list have a maximum sleeping capacity of at least 7 and at least 3 bunkhouse floorplans so you get at least a few options to choose from. We’ve also paid special attention to a fifth wheel’s user reviews so you know you’re buying a fifth wheels with a satisfied user base. 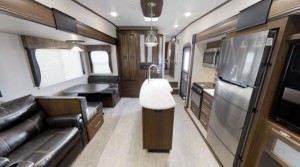 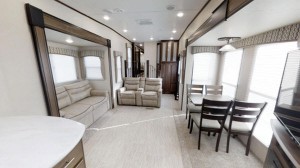 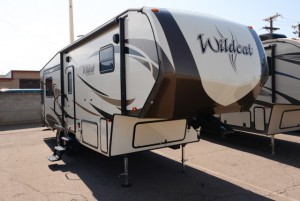 Why we recommend the Forest River Wildcat fifth wheel: Given that it has 24 floorplans, it shouldn’t come as a surprise that the Wildcat, which is already a great fifth wheel, is also one of the best fifth wheels RVs with bunk beds as well. It can hold a maximum of 10 people in the Wilcat 28BH floorplan, but you could also go for the Wildcat 38MBX if you’re looking for something smaller. It’s also smaller and lighter than some other fifth wheels, making it great if your towing vehicle isn’t suited for heavier fifth wheels.

Heading on to the features, it has all the luxuries of a camper, as a fifth wheel well should, such as reclining theater seating and large LED TVs in the living room. On the outside, it sports custom accented front caps for a sleek look and some exterior features such as awning and outdoor speakers. You can also take it up a notch through the list of available options, which we recommend talking a look at in detail on the RV page! 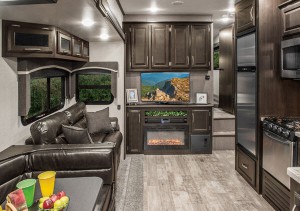 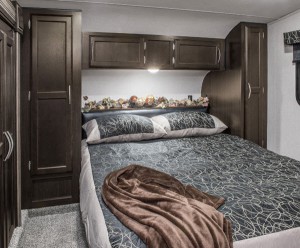 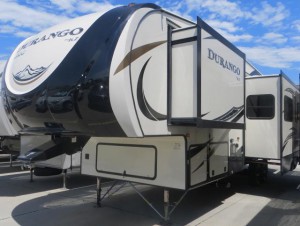 Why we recommend KZ Durango 1500 fifth wheel: While 7620 lbs might not sound light by any stretch of imagination, it would seem like it when you would look at other fifth wheels that start with 10,000 lbs dry weight. The Durango 1500, on the other hand, manages to add a good chunk of bunkhouse floorplans such as the Durango 1500 D280BHS and the Durango 1500 D292BHT, with its footprint ranging between 28 and 35 feet.

Tailgators will find the Durango 1500 quite appealing since it has all the writing for an exterior TV and has outside speakers too. Its equally good in terms of indoor features, where you’ll notice a full sized refrigerator, a deluxe sleeper sofa, pullout pantry and a faux vinyl ceiling. Similar to our previous choice it has a ton of different upgrades available: convection microwave, standalone DVD player, freestanding table and rear observation camera, to name a few. In a nutshell, the Durango 1500 is definitely a top choice for fifth wheel RVs with bunk beds. 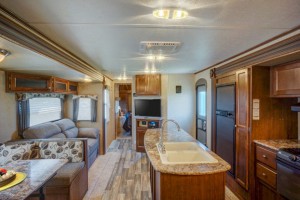 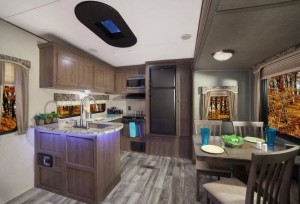 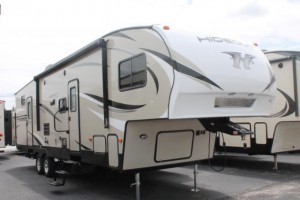 Why we recommend the Keystone Hideout fifth wheel: The fifth wheel version of Keystone’s hideout is a bit different yet similar to its travel trailer version. Different in the sense that it features lesser number of floorplans and obviously more features since it’s a fifth wheel, but similar because its equally loved by users and critics in the fifth wheel world for its top notch quality and features. We recommend taking a look at the Hideout 295BHS and the Hideout 308BHDS.

Keystone’s attention to details is clear with the Hideout once you’ll notice that it has taken care of storage for those opting for a shorter fifth wheels and, of course, all of the luxuries regardless of which floorplan you choose. We liked that it had taken care of safety particularly well since (can’t be too safe, right?). Furthermore, it has a few options such as a free-standing dinette and a spare tire, making the Hideout another great choice! 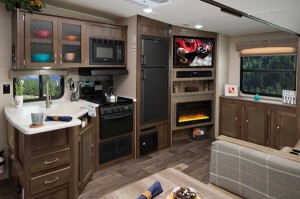 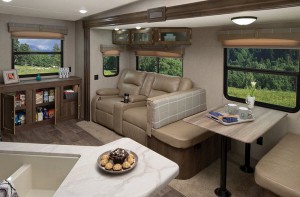 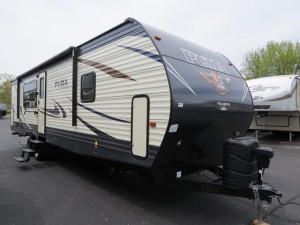 Why we recommend the Palomino Puma fifth wheel: Palomino’s fifth wheel version of the Puma is a fifth wheel with, frankly, so many floorplans available that ones who didn’t make a checklist for buying their fifth wheel will find themselves confused because they’re all so good. From the 29 feet Puma 259RBSS to the 38 feet Puma 295BHSS, they’re all great and, of course, feature a lot of other bunkhouse floorplans too!

On the inside, the 80-inch height will allow people to comfortably stay and enjoy the luxuries it has to offer whether its cozying up on the sofa near the fireplace and watching some TV or cooking in the kitchen with its decorative splashboard, 3 burner cooktop and 6-feet double door refrigerator which can be upgraded to a 11 feet variant, as can its other aspects through a list of different options available. A few of them include but are not limited to an upgraded Serta® mattress, bike rack and roof ladder.

One of the Cozier Fifth Wheels Out There! 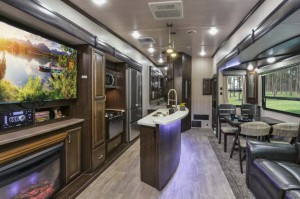 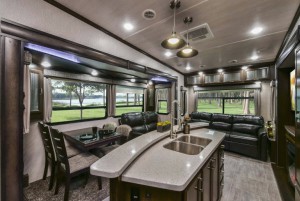 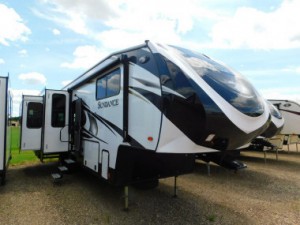 Why we recommend Heartland Sundance fifth wheel: The Sundance is another fifth wheel that isn’t oblivious to our other top fives. With its versatility both in terms of sleeping capacities and length, it’s likely you’ll find the perfect floorplan for you with the Sundance or, at least, somewhere pretty close. For bunkhouses in particular, the Sundance 297QB and the Sundance 3710MB are pretty great choices.

The Sundance is segregated into two variants: the mid profile and the high profile ones. There are bunkhouse floorplans in both variants and we’ll focus on the ones that are common in both of them. For starters, they have slam latch baggage doors, painted fiberglass front cap and solar prep. On the inside, both of them have 8 cubic feet refrigerators, universal docking stations and tri-fold sleeper sofas. Both can be upgraded to a 15,000 BTU air conditioner over the traditional 13,500 BTU one too.

Forget the worries about having enough beds for the gang to sleep in. With these fifth wheel RVs with bunk beds, your next camping trip will be a memorable and a comfortable one!

Share with us your favorite fifth wheel RVs with bunk beds in the comments below!