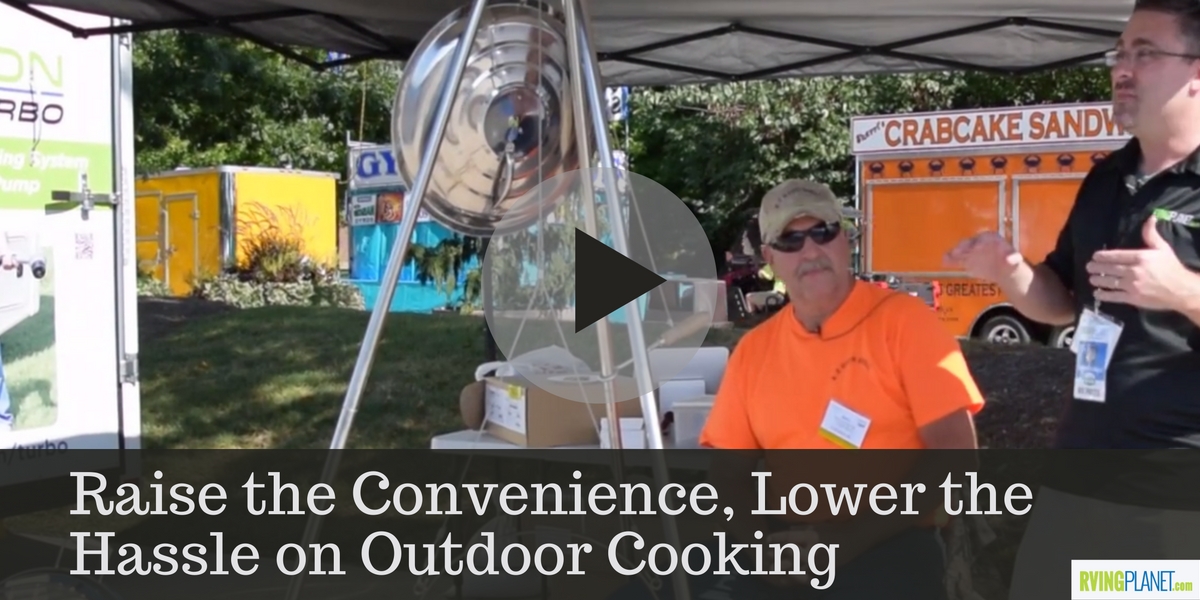 
WHAT WAS SAID IN THE VIDEO…

Kevin:    Hey guys. This is Kevin again with RVingPlanet.com. As you know, we’ve been going around at the Hershey RV Show this week. I’m trying to find some fun and interesting things to bring to you that we discovered that might be able to have fun with while you are RV-ing. We’re walking by here yesterday. If you’ve ever done any outdoor cooking open to open fire. RV, yeah, it’s fun to cook inside, because you have a kitchen, but, man, is it awesome to be able to cook outside? I’ve used some things that maybe weren’t the best things to use, but I can across this thing, and I was pretty excited about it.I’m going to have Doug tell you more about his product, what he’s got going on here, and then where we can find it.

Doug:    Okay. I came up with this idea years ago. I wanted something simple and easy for the guy that’s doing the cooking. We were cooking in a flat grill with three cables years ago. My brother-in-law was trying to flip a pork rib and hold the grill at the same time. He flipped it to the fire and he said, “You know, you’re always making someone to come up with something to prevent this.”
What I did, I have a double grill that traps in the food. When it’s time to flip the food, I’ll flip it. I’ll put the lid on, give it a spin. I lower it down, and I don’t have to mess with it, handle the food that takes care of itself. It will to spin up to five minutes. When it’s time to flip again, I can check the food out to see how it looks. If it looks good, take it off. Your grill is numbered, so when you have your slice piece of food, you want it spiced up, you put it behind that number, and you know that’s yours. When the grill comes off the top like this, that’s your food. Easy removal. I can do pizzas on it, bacon, bakes potatoes, whatever.

Kevin:    There’s one here that you have on display right now, and then there’s ones to the right that’s a little bit bigger. There are two sizes?

Doug:    The list is one of the keys to the cooking that would help to cook even and faster, and they also smokes the meat.

Doug:    Yep, and I hang it up. It’s easy. A couple of chains. The chain assembly up there, so I can hang the grill and the lid up there on the top, so then you don’t have to lay it on the chair or anything, and mess with it.

Kevin:    What about clean up?

Doug:    Yeah. What I do is I like to spray with a high heat pam or something like that. When I’m done with it, I’ll just take a wedge sponge and it pretty well breaks off.

Doug:    The raise and lower, simple as that.

Doug:    It breaks apart. It has a carrying case.

Doug:    This will break apart here and go into carrying case, and same with the grill.

Kevin:    Nice. Carrying case be able to keep the dirt and …

Kevin:    Because there are going to be stuff on there. That’s obviously sitting on fire.

Doug:    What I do though if the grill is dirty, I’ll slide into a garbage bag, and then I’ll put it in my carrying case, if I don’t want to clean it right then and there. Yeah.

Kevin:    Fantastic. If someone will buys this, and we’ll talk about where to get it in a second. If someone purchases this, what comes with it? Everything? Parts and pieces?

Doug:    Yeah, everything, but this bottom board. You get the tripod, the tray …

Kevin:    You got to make your own fire?

Kevin:    Fantastic. Everything is included.

Kevin:    … fun product. People like cooking outside. Actually, this is like kind of entertainment at the same time, so two for one deal. Check this out. We’ll have a link at the bottom in the show notes exactly where you can go to purchase this. By the way, it’s E-ZOverGrill.com. We’ll have. Make sure we get that in the bottom. Awesome. Thanks again. Doug. I appreciate it.

Doug:    Thanks man. I appreciate it.

Kevin:    Check us out online RVingPlanet.com. We’ll see you there.


OTHER PRODUCTS REVIEWED AT HERSHEY