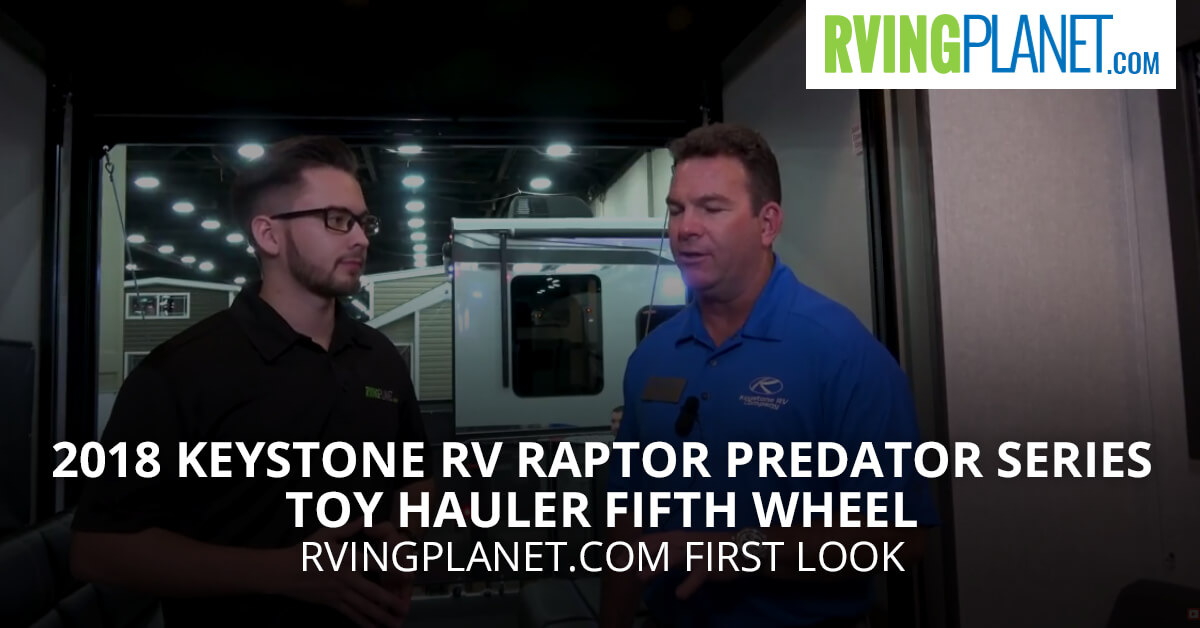 Nate:  Hey, folks. This is Nate with RVing Planet.

Nate:  And we are here to show you the new Predator series Raptor by Keystone.

Kevin:  I’m Kevin Warren. I’m the factory rep for the Raptor and Carbon toy haulers. I’ve been with Keystone RV on the Rap product for almost 14 years. So I’ve been representing toy haulers for a pretty long time.

Nate:  What would you say that makes this brand unique?

The great part about that is you get the construction and quality in the Predator is the same as the Raptor without all of the extra cost involved. So to just have the simple functional things that you need in a toy hauler.

Nate:  Describe the person that’s going to get the most out of this. Is it going to be like a family, like single people, is this for active adventurers?

Kevin:  The great thing about toy haulers is it’s versatile for really kind of anything. It’s not necessarily for the person that’s got motorcycles or ATVs or side-by-sides. A family that’s got bicycles and barbecues and just a lot of stuff can get this in your beer selling to a family needing a bunkhouse all the way up to that guy that’s just got a lot of motorized equipment to come in here as well. So lots of versatility.

Nate:  What sets the Predator series apart from other, just like a couple things that are big differentiators?

Kevin:  So we’ve captured a lower price point that there’s not a lot of manufacturers in. But predator is pretty lean as far as who’s offering a good functional quality toy hauler with the important features, generator, fuel station, air conditioner in this price range. So we’re getting a lot lower and we’re opening ourselves up to people that maybe have less affordability or just simply want to be a little bit more simple in what they’re purchasing.

Kevin:  Generator, freshwater tank, and I would say affordability. Really I mean that’s the big thing with Predator.

Nate:  If you want to check out the Raptor Predator series by Keystone you can head over to rvingplanet.com. And thank you, Kevin.

Ask A Question About The Raptor Predator Series 352TS