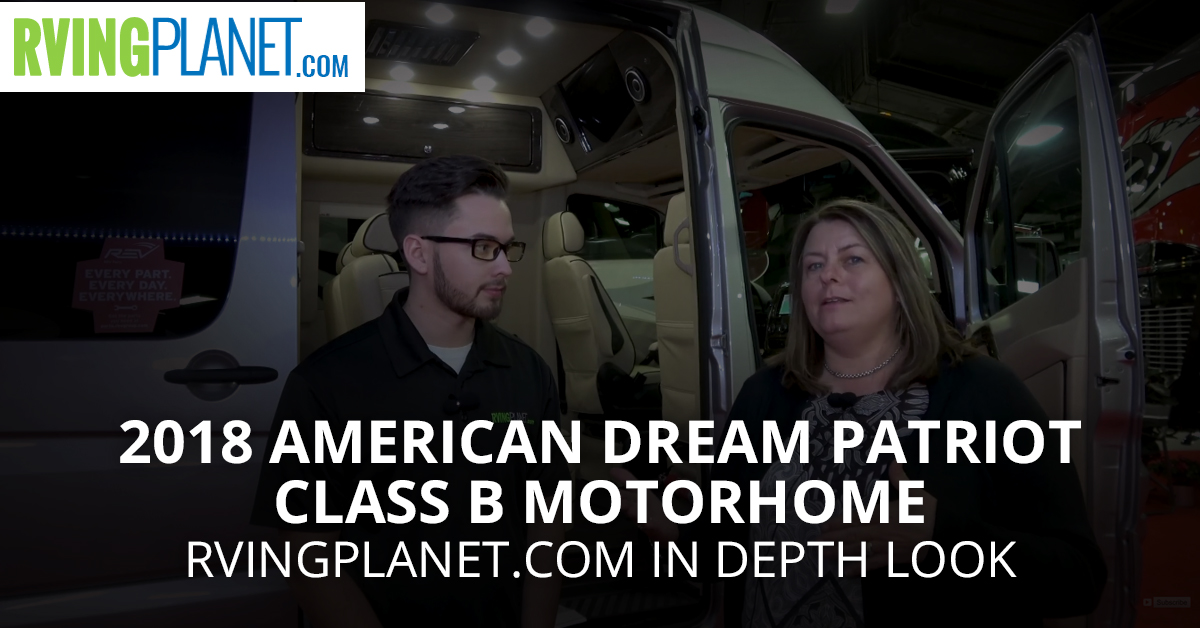 Nate:  Hi, guys. This is Nate with RVing Planet.

Nate:  And we’re here to show you the brand new American Dream Patriot.

All right, Jayne, so we are looking at the American Dream Patriot. And what makes the Patriot brand unique?

Jayne:  Well, first of all the Patriot is new to the American Coach lineup. And the neat thing is for years American Coaches have all been 42-feet or longer. We’re seeing an emerging market now of people who are your age and my age, and people who have kids who want to park this in their driveway at home and not have to store it somewhere, but still be able to get out and go to travel soccer games and do all that fun stuff with their family, but not have to go somewhere and get it out of storage to go.

Nate:  Why is it special?

Jayne:  Well, the cool thing is number one this is very affordable. For not too terribly much more money than you might go buy a new Chevy Suburban for, you can be into something like this that has a shower in it, a bathroom in it, be able to watch TV in it, be able to get up and move around when you’re going down the road, cook in it. But the really neat thing about it is unlike other class B’s that are out there, when you’re inside this you feel like you’re in a high-end luxury car, not necessarily in your traditional RV that you might have in mind that your grandparents own.

Nate:  What are your top three favorite features in the Patriot?

Jayne:  It’s hard to pick three, but speaking from somebody who drove one of these for 3,400 miles in 11 days I totally got sold on this Coach for a couple of reasons. Number one it is the quietest Class B on the market.

Number two I would say my second favorite thing is just the whole Class B compact size, but kind of go a little bit step further with the wood that we do. Nobody else is doing this kind of wood in a Coach, it’s what lends itself to that feel that high-end luxury automobile inside.

And number three I would say one thing that we do that nobody else does is we coordinate our dash panels and our door panels with the same color that’s inside the Coach. So everybody else out there in the marketplace basically uses a standard gray that comes from the OEM. We take those panels off, and we color code it to match the inside of the Coach.

Nate:  Jayne, if you’d like to check out the American Patriot you can head over to rvingplanet.com.